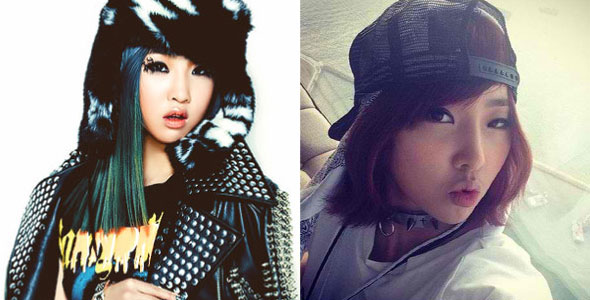 Minzy’s admission came after reports that there have been ongoing speculations that she underwent Korean rhinoplasty. Fans pointed out that the 20-year-old singer looked noticeably different in her recent photos.Her new look was previously attributed to weight change, aging, hair and makeup, but netizens said her nose looks a lot thinner than it did in the past.

It turns out that the youngest member of the international idol group did get an operation to fix her rhinitis, and then decided to also undergo a Korean nose job to straighten her nose while she was in the hospital.

According to a YGGLADIES article titled, "[131126] EXCLUSIVE: Minzy, beauty tip? “nose surgery” straightforward acceptance", the singer said she has been frequently troubled by rhinitis, which made singing and dancing difficult and prompted doctors to advise her to undergo surgery.

“When I went to the hospital, they said my nose was slightly twisted. To perfectly fix it I had no choice but surgery,” she said.

During the group’s recent appearance in a live concert, many fans noticed that the youngest 2ne1 member appeared different, pointing out the change in her nose and jaw.

“I have never done a surgery before so I was worried at first. But my mom advised me to do plastic surgery if I am going to correct my nose anyways. So I thought about it for a long time,” the idol star said.

Rhinoplasty refines the shape of the patient’s nose by bringing it into balance with the face’s other features. According to cosmetic surgeons, because the nose is a prominent facial feature, a slight alteration can bring out vast improvements on a patient’s appearance.

Minzy said she was worried that the head of 2ne1’s music label YG Entertainment, Yang Hyun Suk, would oppose her decision, but she was surprised to hear a different response.

“He had hostility towards plastic surgery so I was afraid the mention about it first. But I collected my courage and asked him. He said ‘Gummy and Wheesung also suffered from rhinitis. If you have to do the operation do as your mother says.‘ I confessed that I am going to do my nose job as I treat my rhinitis,” the singer said. An agency representative told media that the condition made it hard for Minzy to perform live.

Rhinitis is caused by an inflammation of the mucous membranes on the nose. Doctors said its most common symptoms include runny nose and stuffy nose.

Korean celebrities and plastic surgery are always creating buzz among netizens and fans. But you see, getting a nose surgery, a Korean eye surgery or any other cosmetic procedure done is not always for aesthetic purposes. Take Minzy for example. Her main goal is to treat a medical issue, but the result she got is a pleasant one, not just medically, but also visually.