In the hustle and bustle of our everyday 21st century life, we don’t really take notice of the potential dangers of our selfie-loaded culture. But obsession with self-image can indeed become a problem, as in a rather recent case where a British teenager reportedly tried to kill himself because he wasn’t satisfied with the quality of his selfies. This is why some people choose to opt for cosmetic surgery, but even then it could still be a problem!

As highlighted in the 3 lessons to learn from extreme plastic surgery in Korea that went wrong, Hang Mioku, a former Korean model is a good example here: she was perpetually dissatisfied with her looks and after being low on funds, made the unwise decision of injecting herself with cooking oil. She was a plastic surgery addict. According to plastic surgery statistics, South Korea is said to be the most cosmetically enhanced in the world, with plastic surgeons that are 1.7 times more experienced than Taiwan, 6.9 times more than Thailand and 17 times more than China.

Even with some of the best plastic surgeons in Korea, this cannot fully protect plastic surgery addicts from themselves. There have been countless of cases where after feeling dissatisfied with their looks, teens to adults have killed themselves.

If you know someone who is keen on cosmetic surgery, a sensitive soul and image-conscious, you’ll want to keep an eye out on the 3 signs of a Korean plastic surgery addict – just in case.

Sign # 1:
Obsessive, Compulsive and Image-conscious
Does the person worry too much about their looks? Everyone worries about how they look to others at some point, but they don’t check their little compact mirror for the thousandth time in a day,or compulsively taking a million selfies in a single day, before crying their eyes out at every single picture -- lamenting on how ugly they think they look.

But in reality, they’re not a Frankenstein-zombie hideous monster that they make themselves out to be.

Sign #2:
How far do they go in their pursuit for the ideal image?
Are they spending all their resources such as money, time and energy on cosmetic surgery purposes? Do they eat instant ramen noodles 24/7 for months on end, miss out on work or skip out on school often? Simply put, is their mental, emotional and physical health deteriorating in their pursuit of the ideal image?

This is unfortunate. All we got is the present moment, really. Cosmetic surgery is a means to an end, but when people forget about the importance of the process, the journey itself, life itself can be hell. There is a difference between saving up for a nose job, and forsaking everything you are and have right now, for a nose job that will be done in a year.

Okay, so you may know someone who may be an addict, based on the first two signs. Maybe you’ve tried to butt in and tell them that maybe they’ve gone too far. Do they react violently to you? Violence is not always physical, it can be emotional too. Marshall Rosenberg, a psychologist and author of the book Nonviolent Communication: A Language of Life, had once said, “All violence is the result of people tricking themselves into believing that their pain derives from other people and that consequently those people deserve to be punished.”

As cliché as the old saying goes, to give out love, a person has to first learn to love themselves.

Now, look at her: 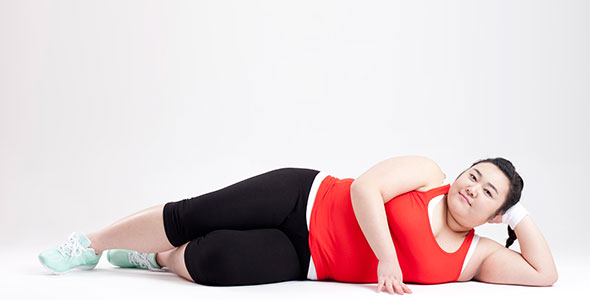 Even though she's overweight and not considered to be a "conventional beauty", she gives out an air of confidence. Are those gym clothes? Wow, someone's been working hard!

Personality is just as attractive, if not more attractive than looks. I mean sure, people probably tease her from time to time. But she looks relaxed, as though she has acknowledged and accepted her flaws. More importantly, she knows that she has the power to change for the better. So, who cares what anyone else has to say?