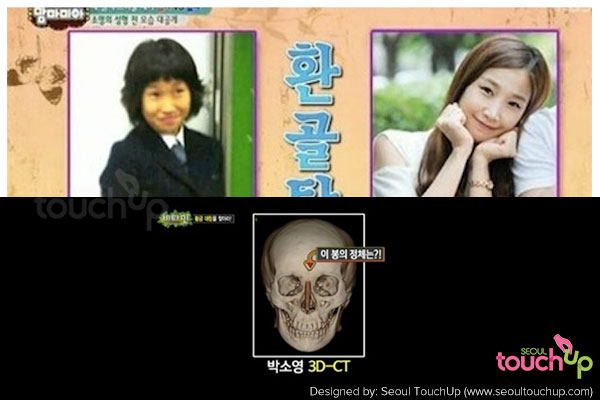 4 TYPES OF ATTITUDES CELEBRITIES HAVE TOWARDS PLASTIC SURGERY

In the past, getting cosmetic surgery was taboo and only discussed through hushed whispers amongst celebrities, it was a secretive and hidden thing. These days it’s easy to see that many Korean and other Asian celebrities alike have gotten some kind of cosmetic surgery work. Sometimes, it’s straight out confessed, other times its revealed by external sources, and there are also those that have obviously gotten something done but would never admit to it. These are the four types of attitudes that many celebrities may have: the unashamed embracement, the reluctant confession, the “What have I done to myself?” and the “What surgery work? I was born like this.” Here are examples of the above: 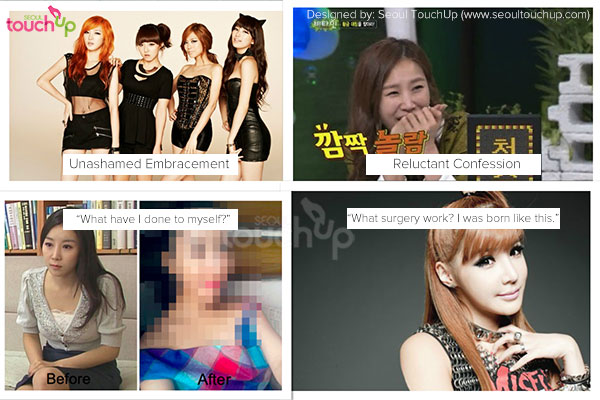 Unashamed embracement: The Brown Eyed girls are perhaps the number one girl group in Korea who have fully embraced this modern cultural phenomenon. They are happy to let you know exactly what they had gotten done, if it wasn’t for the fact that their faces change every so often!

Reluctant confession: A CT scan broadcasted over television had left So-young Park at a loss of words, confusion setting in before she had no other choice but to admit what that foreign object found in her nose was. That aside, she had also done a heap of other procedures.

The “What have I done to myself?” scenario: It’s unfortunate but there are many cases whereby surgery work had left a once beautiful face to lay waste. This Korean reporter regrets her decision.

Regardless, all of them have gotten their bodies and faces transformed by the hands of country’s best surgeons (except the unfortunate cases). But in this here article, let’s look at the above mentioned So-young Park.

A bit unexpected to be broadcasted on a health-focused show, but Ms So-Young Park’s surgery was exposed through a CT scan during KBS2TV’s Vitamin. When everyone had asked her what that brown pole-shaped thing was in her CT scan, at the bridge of her nose, this popular comedian reacted the way you’d expect: first with confusion, then by laughing and admitting to it. That should not be there! Except, it did because as it turns out, she had an implant.

The Details of Her Surgery Work

Curious to know just what she had gotten done? Well, every detail has been reported and we’ve seen it all. Now there’s no reason she had to hold herself back there. As she confessed, she did a number of things: first, a tummy tuck and other less invasive procedures, for a total of US $1,129 for eye surgery, a further US $3,293 on rhinoplasty, and god knows how much for her lips. That’s not all, she also had corrective tooth surgery that had totalled a whooping US $9,410.

WHICH KOREAN CELEBRITY WAS BUSTED ON NATIONAL TELEVISION?

She’s not the only one there as there were many other Asian celebrities that have been exposed on television, some reacting well to it, others not so much. But if you’re curious to know, we have a comprehensive collection on which Asian superstar was exposed on television in our Asian celebrities and cosmetic surgery trends series. Some of them chose Korea as their beauty haven, while others opted for local clinics.

So how does one avoid disaster here in Korea, like those unfortunate ones who are reaping regret post-surgery? It’s actually fairly simple and can be concluded in three steps: with (1) the proper preparations, (2) awareness, (3) adequate rest, relaxation and after-care. All these can be done on your own, with a trusted loved one, or a licensed professional that has connections and knowledge on the Korean cosmetic surgery industry. The first point is possibly the biggest step to take, and the hardest.

Take one step in Gangnam district and you’ll be dazed by the number of options available. To sort through and find the right one for you is the problem. For this, researching on the internet is an option, but so is having face-to-face consultations with real life professionals who are not only licensed, but are known for their ethical practices. You don’t want an illegal broker or shady surgeon offering half a price, but half your face and beauty back at the end of the day. You’ll also want to make sure that you have the required travel essentials ready at your fingertips.

But perhaps the most important point of all, would be the second point, cultivating awareness throughout your entire journey here. Seoul is the beauty belt of South Korea, but also the most competitive when it comes to everything beauty-related. The industry has garnered a reputation and a huge profit for the country. Still, there are dodgy practices out there to use and abuse you, so be aware. Getting plastic surgery done can be tedious and daunting, but manageable as long as one keeps their eyes open, and heads clear. Know the difference between the types of surgeries, their health requirements and risks involved, as well as what it can and cannot do for you. Someone with say, heart disease may want to keep in mind how their medication could affect the success of surgery work. That’s why it is advised to have a loved one and a professional around, someone who can take care of you and someone who is knowledgably enough to make the right recommendations.

Lastly, but not a step to skip would be taking the time to unwind, relax and recover right after everything the body has been through. Read up on everything you’ll need to do for yourself, whether hospitalization is required, how long your stay will be, what you can consume, what kind of exercise or physical activity to put on hold, and other daily stressors to avoid. Another important point to note is when you can return to work or expect the next treatment without complications arising.

One last thing that we haven’t mentioned but has been mentioned earlier on, is having the right attitude. You’re either committed to this, or not. It’s a terrible idea to be halfway into this but wanting to back out at the last minute, as it could lead to horrible results. Which attitude would you adopt among the four mentioned above? Is this a pursuit that would leave you anxious to be judged by, or one that you’d embrace and freely let others know? Because at the end of the day, this could really impact your mental health! Definitely an oversight to be avoided! You could be strong as an ox, flawless as a model’s looks, but tormented by thoughts of inadequacy or judgments. Thus, having the right mindset and realistic expectations is another thing you will not want to miss.

Beware of your thoughts, they become your words.

Beware of your words, they become your actions.

Beware of your actions, they become your habits.

Beware of your habits, they become your character.

Beware of your character, it becomes your destiny.

All in all, getting cosmetic surgery work done can be challenging and scary, but can be simplified by holding the right attitude and mindset. This can really make or break the entire process, as reflected by the above quote.