Plastic surgery is one of the most popular ways to alter your appearance to something that you will feel comfortable in. It has provided millions of people with a new start and with a much more comfortable life. However, there may be times in a person’s life when they wish to reverse the procedure and go back to their previous look. There are many reasons as to why someone would choose to make this reversal. Although it may in some cases be because they are not happy with the way that the procedure turned out in the long run, it is usually because they wish to make another change, or because they would like to go back to their natural appearance. To the surprise of many people, this is something that many plastic surgery procedures are able to do.

YOU CAN REVERSE ALMOST ANYTHING, BUT NOT TO THE SAME EXTENT

Technically, all plastic surgeries are reversible to a certain extent, or perhaps entirely. It all depends on the complexity of the procedure and how much of your original look was altered. Simple procedures like Korean botox, are entirely reversible because they disappear on their own. This is because it is a procedure that isn’t permanent to begin with, so the botox that was injected in your skin gradually disappears. However, other simple procedures like eyelid surgeries and skin augmentations can also be reversed to a point where they look almost exactly as they did before the surgery. However, unlike botox, these reversals also require another surgery to be done in order to be altered again. And depending on how much the surgeon is required to go back in time, this reversal procedure may be as complex as the original one.

PROCEDURES THAT ARE EASY TO REVERSE IN GENERAL

Any procedure that doesn’t reach too deep inside the structure of your skin, and procedures that require only small incisions are among the easiest ones to bring back. Lip augmentations, simple eye surgeries, earring hole surgeries and minor skin lifts are generally reversible to a great extent. This is because they do not make big changes on your body to begin with, which means that only a small portion of your skin was used to make the changes. You have no doubt already noticed that the skin is mentioned a lot when it comes to surgery, and this is because your skin has the ability to heal, meaning that is closes holes and incisions, but it does not have the ability to ‘grow’ back in terms of its length. So as long as you haven’t changed the general structure of your skin in that particular area, you generally don’t have much to think about when it comes to the reversal process.

PROCEDURES THAT ARE VERY DIFFICULT TO REVERSE

Although there are quite a few procedures that you can alter one more time to return to your original appearance, this is not true for every operation, especially for those that have made huge changes to your body. For example, any operation that involved the restructuring of your bone structure will be irreversible in the sense that your bones will not be able to grow back. If you really did wish to change the appearance of that particular procedure once again, you would have to undergo another operation that would add an artificial bone structure underneath your skin, and use it to make it look like you have reversed the process. This is quite a difficult thing to do, and it would require another recovery period where you would feel as if you had done the entire plastic surgery all over again. Additionally, depending on how much detail needs to be changed, you may need to organize a medical trip to Korea in order to ensure that you are working with the most professional doctors possible to get it done. While the final result is likely to please you, once again, it would be like having an entire surgery done all over again.

But on the plus side, there are a number of operations that most patients do not expect to be as reversible as they are. For example, breast augmentations that involve silicon implants are basically entirely reversible because the only thing that would have to be done is to remove the implants. While there may also be some minor additions needed in order to return the skin to a more natural look once the implants are out, the overall consensus is that breast implants are quite reversible. But breast augmentation is one of a very few serious procedures that could be returned to their previous look, as there really aren’t many major changes that could be done in the same way.

One of the most frequent reasons why patients decide to go back to their previous look is because they have grown tired of the change that they have made on their body. This is usually in cases where big changes have been made, or an outside material was placed inside the body to enlarge size or change the overall shape of a certain part of the body. Breast implants, a bigger backside and cheek implants are among the most frequent of such procedures. While most patients go to great detail to plan their surgeries, especially in such cases as mentioned above, others do not put as much thought into it and end up with something that they no longer feel pleased with after a while because it wasn’t what they wanted to have done in the first place.

There are also cases, although much less frequently, where patients are very unhappy with how their surgery turned out and wish to have it reversed or changed as much as possible. This may or may not be the surgeon’s fault, but the bottom line is that the patient has ended up with a look that they are very displeased with. For the patient, this will be a lot more difficult to take than being bored with their new look, because it would have been something that the patient was really looking forward to, and it was a shame that it turned out in a wrong way.

HOW TO PREVENT FROM WANTING TO REVERSE A SURGERY

Planning is very important for any plastic surgery, regardless of how serious it is. As soon as you begin to think about plastic surgery, you need to think about it on a much deeper level than simply thinking about how it will make you feel physically. Any change made to your body will also greatly impact your mental health. And although this is something that will normally change for the better, if you don’t plan your surgery properly or get the right doctor to do the job, you will end up in a very difficult emotional state that will not be bring anything positive out of the change that you wanted to make for yourself. 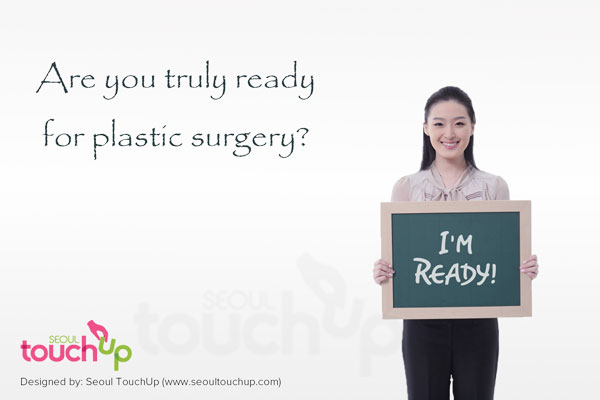 You need to make the right choice of doctor for your procedure, as this is perhaps one of the most important triggers as to whether you would want to reverse it later on in the future. Of course you should focus on the surgeon’s previous experience and how well he is specialized in that particular area of the body, but you should also focus on finding someone that really understands what it means to undergo a plastic surgery. There are many Korean plastic surgery professionals around the world, especially in Korea, but the ones that truly stand out are those who are willing to spend a lot of time with the patient before the surgery. Look for doctors who offer free consultations to their patients, and who spend all the time during such a consultation to not only explain the procedure, but also to ensure that it will really be something that will benefit  the patient’s life. Many people do not fully understand what it means to have plastic surgery done, so they sometimes go into it without much thought at all. You really don’t want to be one of those people, so make sure that you take it very seriously and that you know what you are getting yourself into.