In the last decade, Seoul has earned a reputation for being the Beauty Belt of South Korea, an ideal destination for world-class plastic surgery. The appeal of the Beauty Belt comes down to its specialization on shaping the Asian body, and the fact that surgeries come at a price lower than that of Australia, Singapore and America. There are over 500 clinics that can be found in the affluent streets of Gangnam. With an abundance of options to choose from, an important question arises: which clinic will be the best value for the money? Ever wondered what is considered a fair price for surgery?

The more in-demand a product gets and the more sources offer the product, the more similar in price it gets. This is all due to the theory of “Perfect Competition”. This is why the list contains the average price of surgeries across clinics in Seoul.

The cost will be significantly cheaper for simple surgeries, such as a single procedure (i.e. double eyelid surgery). As it gets more complicated, multiple procedures may be needed and the total cost increases (i.e. epicanthoplasty together with some other combination of eye surgery). That is how it goes from $2,000 for eye surgery as shown in the list, to $4,000 at the other end. Needless to say, there are more complex surgeries such as revision eyelid surgery requiring further expertise and would come at a higher cost.

The table outlines the average cost and ignores clinics that charge these very same procedures at a much higher cost. However, a higher price does not necessarily mean better skill or service. It is common for clinics in Korea to claim expertise in certain kinds of surgeries. However, almost every clinic would claim that they are the best in these surgeries, so taking it at face value is a risky venture. Seoul TouchUp has witnessed those who end up dissatisfied with the results of surgery and how often they have had to undergo several revision surgeries. To avoid such a nightmare predicament, it is important to get it right the first time. This is especially the case for those who travel for seven to ten hours just to come to Korea for plastic surgery.

Without the knowledge or expertise of the Korean plastic surgery industry, it is a very difficult task to choose the best ones for your case. As a result, choosing the best clinic and value for the money is a problem even for Koreans living in Seoul themselves.

Besides the problems mentioned above, there is another confounding matter to discuss. Many choose to travel on their own to Korea for their plastic surgery vacation. Why? The common explanation is that tourists tend to save money. However, is it true that traveling alone would save on costs? Seoul TouchUp has found that this is not always the case.

Usually, when someone travels alone for plastic surgery in Korea, there is a waiting period between the request of surgery and for the surgery to take place. With Seoul TouchUp, there is no such waiting period involved. Furthermore, having an affiliation to hundreds of clinics in Seoul, Busan and Daegu, Seoul TouchUp is able to negotiate surgery prices with the clinics for each individual. All in all, the waiting time will be greatly reduced, as well as the assurance that the surgery plans will go according to what has been discussed between traveller and Seoul TouchUp.

How to Pay Less for the Same Surgery

The secret when it comes to getting the best value for your money is that having many surgeries done at once that create harmony rather than reduce it (i.e. eyelid surgery and rhinoplasty together). Rather than flying to Korea again and again for a different type of surgery each time, getting it all done at once and picking surgeries that are easier to harmonize the face will cut back on a lot of future spending. Furthermore, usually paying in cash for procedures will help you save more money. It could be risky and cumbersome if you had to bring more than $10,000 in your purse. Many customers choose to wire transfer a certain amount to Seoul TouchUp before they fly to Korea for convenience’ sake, and subsequently Seoul TouchUp helps negotiate the price with the clinic using the cash.

Another popular destination for plastic surgery is in America. So, why choose Korea? On average, the surgeries are 30 to 50 percent more expensive in America than in Korea. Also, in America, every single thing is charged such as anesthesia, hospitalization fees, medication and pressure garment. However, if a person were to have eyelid surgery in Korea, everything is covered in the surgery price. (i.e. the $2,000 covers everything from the surgery itself, to hospitalization fees, medication etc.)

Many coming from Singapore have asked Seoul TouchUp if Korean plastic surgery is as cheap as in Thailand. The answer is “No”. Certainly less expensive alternatives can be found outside of Gangnam, but still within South Korea, realistically, prices won’t be as low as Thailand. While Thailand certainly offers lower prices, South Korea offers natural-looking results created by world-renowned doctors.

How to Finance Your Plastic Surgery Trip to Korea

Another common question that is asked is this, “How can I finance my plastic surgery trip to Korea?” Budgeting is indeed very important and to keep the price within one’s budget, there are several suggested surgery considerations. 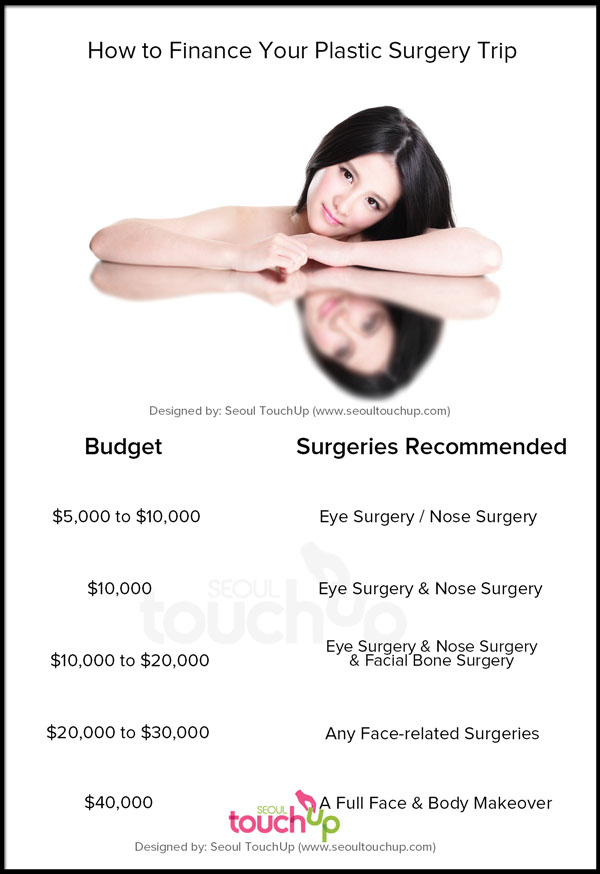 How Long Should be My Plastic Surgery Trip?

On average, most medical tourists are suggested to stay for 7 to 14 days because the first phase of recovery is completed during that period. However, there are exceptions to this case such as an entire face makeover, an entire body makeover and/or a combination of the two. The following are special situations for these cases.

Special A + B : Entire body and face makeover

The previous sections have addressed the most common questions on plastic surgery costs that Seoul TouchUp has found. These insights include a list of the average costs, the pros and cons of traveling solo, how you can finance your trip, and finally to a discussion on the appropriate length of stay for your individual case. As the technology and practises of Korean plastic surgery reaches new heights, the cost for these services will shift. However it goes, Seoul TouchUp will investigate and provide the insights into these changing figures for your convenience.  By doing that, the likelihood that something goes terribly wrong and unplanned will be greatly minimized.