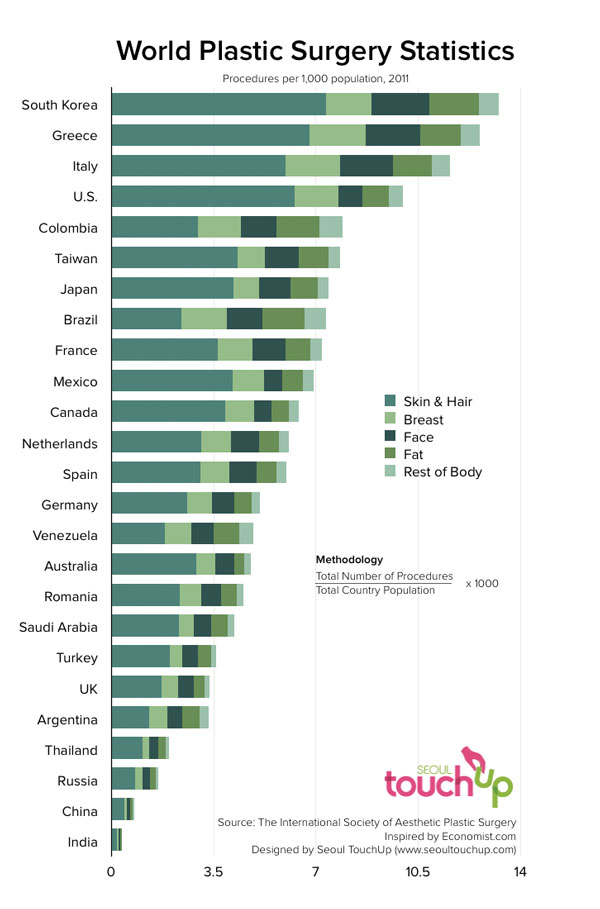 As the World Plastic Surgery Stats chart shows, it is no secret that South Korea is the most cosmetically enhanced country in the world. For every one in seventy-two South Koreans, one person has had some plastic surgery done. Seoul TouchUp has derived the graph from the data researched by International Society of Aesthetic Plastic Surgery (ISAPS). Although the data isn't maybe 100% correct, one can still conclude that there are a lot of plastic surgeries going on in Korea - World's No.1, Asia's No.1. More importantly, one can assert that Korean plastic surgeons are the most experienced surgeons in the world with lots of various cases.

Even before the Korean Wave and subsequent popularity of Korean cosmetic surgery, the surgeons have already begun practicing the art of cosmetic surgery on Koreans themselves. Over years of practice, board-certified doctors have mastered the art of reshaping the Asian body, and are thus sought after by many from overseas. Seoul TouchUp talks with thousands of customers every year and we confirm that South Korea is really the majority’s first choice when it comes to getting cosmetic surgery in Asia. Customers especially appreciate the abundance of choices available, top-notch surgeons, and yet being a less costly alternative compared to other developed countries.

In addition to the chart above, ABC News affirms that one in five Korean women have undergone some form of cosmetic surgery in Korea. So much so that the entire cosmetic surgery practice is valued as a national asset. This practice has led thousands of people to a land that is predisposed to aesthetic beauty. It is here that cosmetic surgery is viewed as a practical solution in an extremely competitive world. Studies show that many Koreans believe that having the “right” face makes all the difference between success and failure. 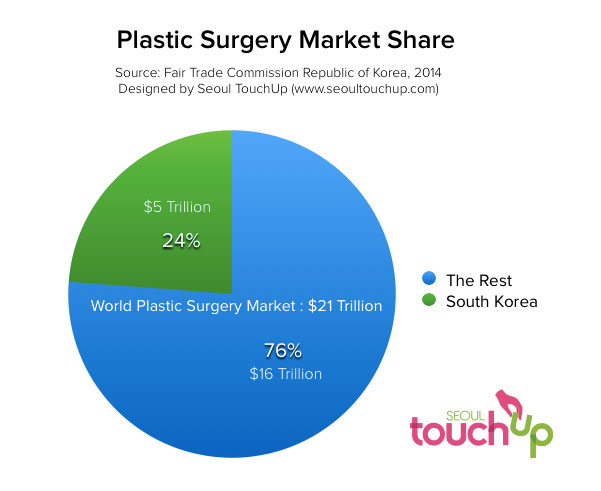 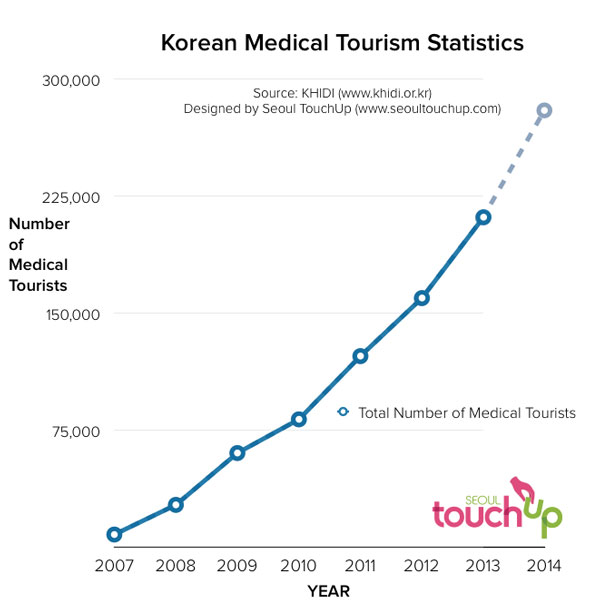 According to the latest statistics by Korea Health Industry Development Institute (KHIDI), the number of people traveling to Korea for medical tourism is nearly reaching a whooping 300,000. From 2010 to 2013, there has been a steady growth rate of 30%, and as of 2014, the trend seems ever-consistent. Seoul TouchUp is confident to say that along with Korean medical tourism stats, Korean plastic surgery’s popularity will only continue to rise for the next 5 years - at least till 2020. 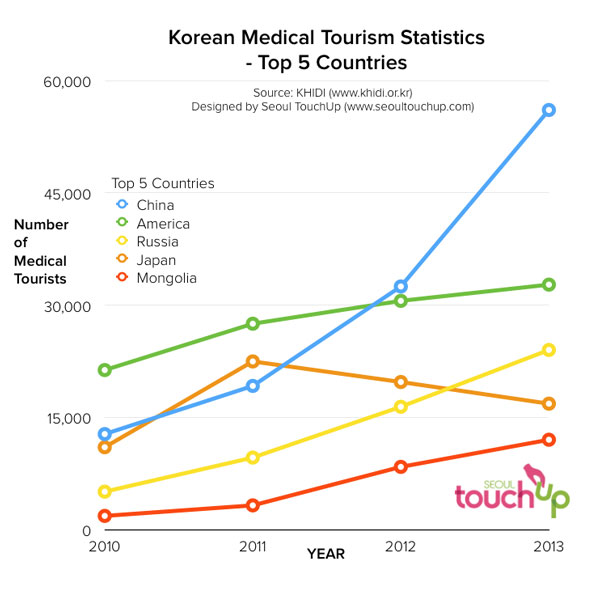 Among nearly 300,000 medical tourists that have entered Korea up to 2014, Seoul TouchUp has found that Korean medical tourism is most popular with customers coming from five particular countries. The top 5 countries are China, America, Russia, Japan and Mongolia.

The degree in which people from these countries are traveling to Korea for surgery is increasing and decreasing at their own rate. Who tops the charts when it comes to having the highest rate of customers coming to Korea? The country is China. It is perhaps because the medical standard in Korea is much higher, safer and more trustworthy than that of China. The second country with an increasing rate of customers coming to Korea is America. Besides the expertise in advanced surgeries, Korea is a less costly alternative to American plastic surgery. There has also been a surprising increase in customers coming in from Mongolia, a developing country that does not have the medical expertise that Korea provides. However, Japan might be the only unusual case because the trend has gone the opposite in the recent years. Seoul TouchUp believes that it is probably because of the drop in value of yen and rising prices in South Korea.

What is the Most Popular Korean Plastic Surgery?

Having witnessed the rise of today’s Korean plastic surgery trends, Seoul TouchUp has found that the two most common procedures include eye surgeries and nose surgeries. The eye surgeries to create larger, double-lidded eyes and the nose surgeries to heighten the oriental nose. The two are so common that they are regarded as the most basic of procedures and are done by 80% of the medical tourists. Also, Seoul TouchUp has found that the most popular procedure in Korea for non-Asians is facial bone surgery. It is probably because facial bone surgeries require a lot of skills and experience. Outside of Korea, it would be difficult to find experienced doctors who specialize in facial bone contouring, even in Beverly Hills. As for those coming from the Middle East, liposuction and face lift are the most in demand.

Best Destinations in Asia to Get Plastic Surgery

Why is Korea considered one of the best destinations? This is because in addition to the excellence of Korean plastic surgery, the average cost of plastic surgery trips in Korea is relatively lower than other developed countries. Seoul TouchUp has found that on average, people are spending $10,000 to $15,000 for their Korean cosmetic surgery trip, including everything from surgery to accommodation. Whereas in other developed countries, especially Singapore, America and Australia, there is less that can be done for the same cost. For instance, with popular surgeries such as eyelid or rhinoplasty, both can be done in Korea for the same cost it takes to get one such surgery done in these other countries.

It is not only Korea that claims to be the best at plastic surgery, but also the CNN that has named Korea as a plastic surgery mecca with highly skilled surgeons. It is Seoul TouchUp’s firm belief that South Korea will continue to live up to its reputation for being world’s exceptional destination for beauty purposes.

How Popular is Korean Plastic Surgery to Men? 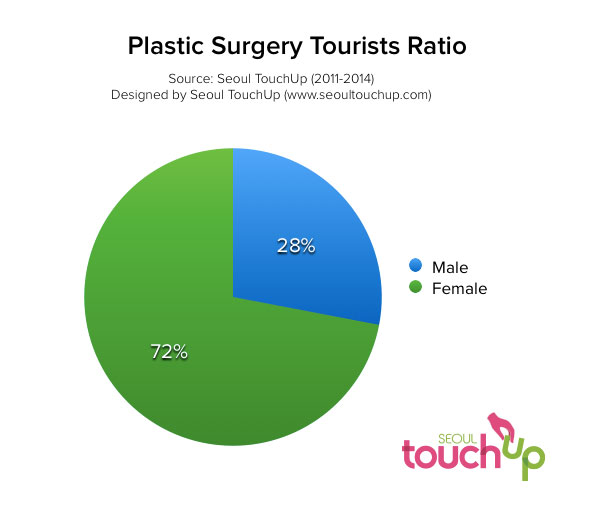 It is the norm in Western countries that most parties interested in getting cosmetic surgery are often women with very little men. However, Seoul TouchUp has found that between the years 2011 to 2014, the number of men coming to Korea for cosmetic surgery is fairly large. The men accounted for an estimated 30% of the total, and where women made up the rest of the 70%. Although women are still leading in this area, one can assume that cosmetic surgery has become an asset even for men, presumably in their career as well as in romance.

Along with that, for the past couple of years, Seoul TouchUp has learned and gathered information from hundreds of real customers who have come to Korea for plastic surgery. We understand what customers are hoping to achieve, the kind of procedures they want to have, and the increasing trend not only in women, but also in men who are seeking cosmetic surgery. There is now enough information gathered to guide customers in ensuring that the choice they make here will be the right one. With the latest information and years of hands-on experience, Seoul TouchUp can assure medical travellers with a smooth, speedy recovery and an enjoyable trip for one of the most positive turning points in life.