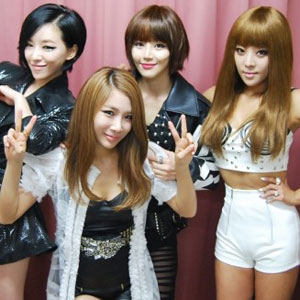 The Brown Eyed Girls have come a long way, debuted in 2006 – back then, the K-POP industry were worried that these girls weren't cut out for K-POP; it was said that their looks did not meet up to idol standards. Fast forward to 2014, and now, they are known as K-POP’s sexiest girl group.

It used to be a secret as the topic of Korean celebrities and plastic surgery has its fair share of controversy, but both Narsha and Ga-in have openly admitted that they have received plastic surgery. Having come clean and perhaps comfortable with the idea of plastic surgery, they have even gone so far as to record a parody version of Lady Gaga’s “Poker Face”. If you haven’t seen it yet, check it out; it’s called “Plastic Face”.

Many people would remember PSY’s ’Gangnam Style’, but two or three decades ago, South Korea’s Gangnam district had remained one of the least developed in all of Seoul. Now, it is one of Seoul’s most affluent areas, and back then, plastic surgery was rarely on the list of wants or needs. Look at other Asian countries such as Singapore, a developed nation that reaches its 49th birthday this year. Back then, it was not a cultural norm to follow what are duped vain pursuits such as plastic surgery – people just did not have the time or resources for such goals, as much as they do now!

Still, look closely – especially if you live in South Korea, Seoul, you’ll notice the game that everyone is playing; while it’s obvious that plastic surgery procedures such as Korean eye surgery and onto more extreme fads such as face contouring surgery has manifested everywhere, in subway advertisements to switching on your television, when someone admits to surgery -- it is still greeted with surprise at best and abhorrence at worst.

Speaking of which, this exaggeration is even funnier when it comes to celebrities. Many a netizen would react in shock when a celebrity admits to having gone under the knife.

You can't help but wonder, is it mock surprise, or are people really still getting surprised at the news of someone – especially a celebrity, having gone under the knife?

This is one thing that the Korean plastic surgery youtube viral video, ‘Plastic Face’ touches upon, that which is not said but everyone knows – "Is getting plastic surgery still such a big deal?"