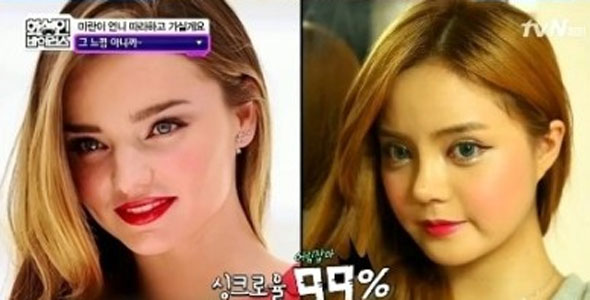 Not only known for their infamous Kim chi or double eyelid surgery procedure, South Korea is also known for their variety television shows. Recently, one of their shows, “Martian Virus” had guest-starred a pretty young lady. This South Korean woman transforms herself in order to look like her idol, Miranda Kerr – an Australian supermodel who is not as popularin Korea comapred to the US or UK.

As quoted, “When I said I wanted to get surgery, everyone around me tried to dissuade me. In fact, people often asked if I had surgery even before I got it.” It is true, there are legitimate concerns surrounding plastic surgery. It can be risky and dangerous business. Putting your body in the wrong, unqualified hands can do irreversible damage to your physical, emotional and psychological well-being. Oh, it is also true that sometimes, people may jump to the conclusion that you had surgery done even when you had not! How many of you are born with natural, double lidded eyes? You know what I’m saying!

Even then, with medical technology advancing ever so rapidly – there now exists non-invasive surgical procedures as well! For instance, Ultherapy. Though medical technology is advancing, so are the number of options to choose from. Which is the right Korean plastic surgery clinic for you? That is a challenging question! With all that said, there are 3 reasons why Korea plastic surgery is popular; there exists quality doctors, the procedures are uniquely Asian for those seeking plastic surgery in Asia, and there are statistics to back it all up. The only advice I can give you , dear enthusiasts, gather together and share your knowledge with one another. Be sure to check out the forums and stay informed.

Disclaimer:(The pictures above were derived from the blogosphere and not associated with Seoul TouchUp)