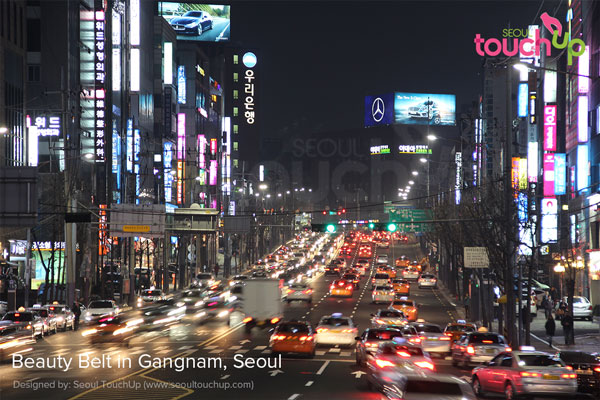 Take a walk through South Korea’s affluent Gangnam Street and it’s everywhere now. It’s on television screens and plastered on buses as well as station walls. There’s no need for hushed whispers. Rather than shying away from it, the majority has embraced it. What is it? The Korean Plastic Surgery Trend. How did it all come about? Before diving head first, here are some facts that everyone who is interested in Korean plastic surgery should know.

The actual establishment of South Korea began after the Korean War (1953) followed by Japan's devastating 35 year colonization. Back then, it was one of world’s poorest nations  and one of its least developed areas was the famous “Gangnam district”. Appearances came second when the need to eat and survive was strong. In 1961, the GDP per capita (in US dollars), was below $100. That means that the average household earned less than $100 a year, so one can only imagine how poverty-stricken the country was.

Fast forward to 2015,  the GDP per capita in South Korea is well approaching $30,000. For comparison’s sake, this incredible economic success story is unmatched by any other in the past few centuries. This all came about when the South Korean economy was boosted by the 1988 Seoul Olympics, and the streets of Gangnam started to change and eventually became what it is today. 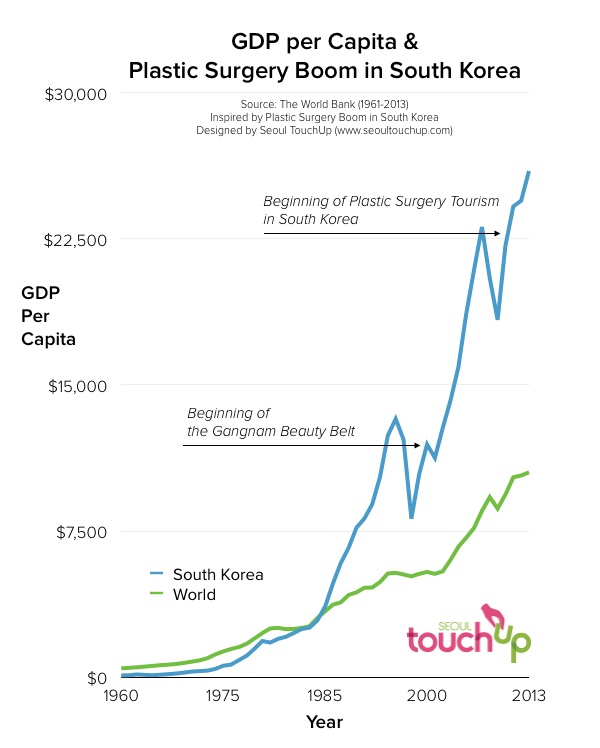 As a whole, modern day Korea is an image-conscious and competitive nation. So much so that getting one’s foot in the door in love and career, greatly depends on how attractive one looks. How much is this ingrained in the South Korean culture? Children as young as high-school aged would receive plastic surgery as graduation gifts from their parents. This could almost be seen as a ritual, before they head out into the real world to face its challenges.

On the other hand, the Korean Wave (K-Pop, K-drama, etc.) has affected more than the local people. It has affected many countries across the world and especially all around Asia. There are now plenty of international customers who are looking for the “natural look” that Korean surgeons are so adept at producing. Furthermore, makeover television shows are broadcasted around the world, showcasing the very best of Korean plastic surgery. Customers have mentioned that being able to witness what Korean plastic surgery can do in these makeover shows reassures them of the transformative power of Korean plastic surgery. Seoul TouchUp agrees that customers do not need to worry as much. As long as the right surgeon is chosen, the results can be as successful, if not better than the ones shown on Korean makeover shows.

The Meaning of Plastic Surgery in Korea 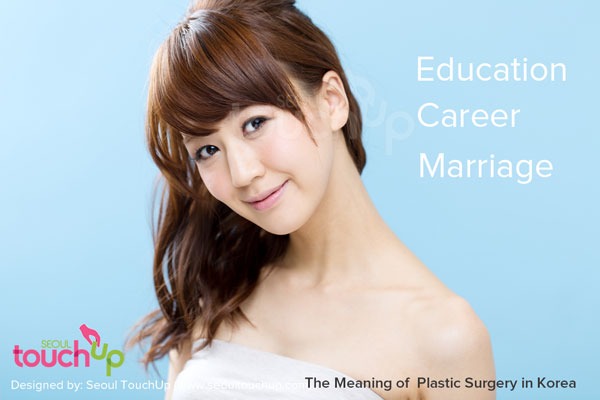 Despite what a lot of media coverage has said about the country’s unhealthy “obsession”, Korean plastic surgery does hold a great deal of meaning for South Koreans. In the last few years, public attitudes towards cosmetic surgery in South Korea have become increasingly optimistic. In general, cosmetic surgery is seen as a worthwhile investment, rather than a sign of vanity as it is often understood in the West. Where it once held a rather conservative, traditionalist mindset that came from Confucius’ teachings, all that is no longer true; a new culture has been born, one where taboo against any such pursuit has been thrown away. Many parents encourage their children to undergo surgery in efforts to gain a "competitive edge" in the job market. But it’s not just the young ones who have embraced this change, even the older folk have done so to create a more youthful look and relish a new life.

It’s a known fact that the modern Korean woman has exchanged maternal and domestic femininity for a slim, toned body and youthful face. For many Korean women, cosmetic surgery is seen as a symbolic, coming-of-action practice that is believed to bring about significant changes in one’s in education, marriage and career. 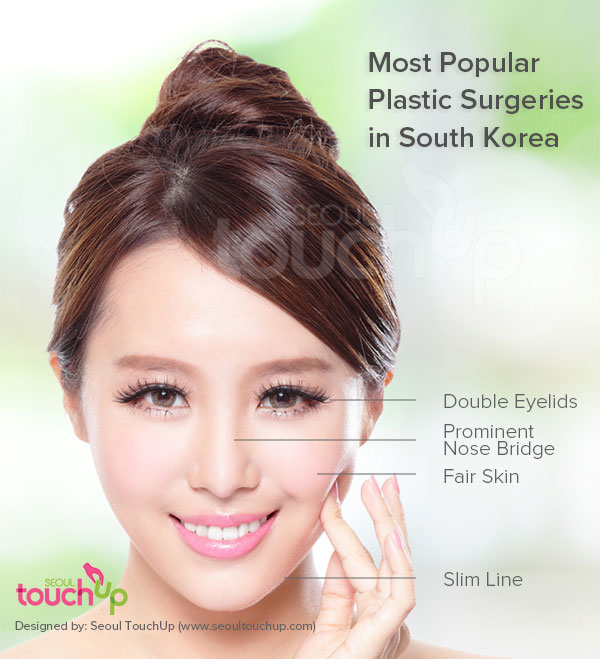 Aside from the meaning of plastic surgery in Korea, Seoul TouchUp has accumulated more insights, but this time into the plastic surgery trends that are prevalent today. It is an undeniable fact that modern day South Korea is extremely image-conscious. But what kind of image is prized, exactly? In Asia, a youthful-looking appearance is seen as desirable. The popularity of Korean girl and boy-bands sporting the ulzzang (얼짱)  look is believed to propel both men and women in their early twenties to seek a softer image. This includes a prominent nose tip, a less angular jaw and double eyelids.

For the ladies, the Korean look isn’t very far off:  Creating fairer skin, double eyelids, a prominent nose bridge, and a slimmer looking face is commonly requested by many expats. Since Goo Hara from the hit girl group KARA along with Miss Korea 2012 professed to cosmetic surgery, more and more Korean celebrities have also found to have gotten surgery. Many fans fixated by the natural-looking, flawless faces of Korean celebrities travel to Korea for cosmetic surgery.

The most popular cosmetic surgery in Korea is double eyelid surgery, which make the eyes look bigger and rounder. An operation to refine the nose (rhinoplasty) and reconfigure the jaw bone are also increasingly popular. All in all, Korean plastic surgery is desired for its natural-looking results as shown on the cosmetic surgery makeover show, “Let Me In” that is arguably said to showcase the best work done by the country’s renowned surgeons. 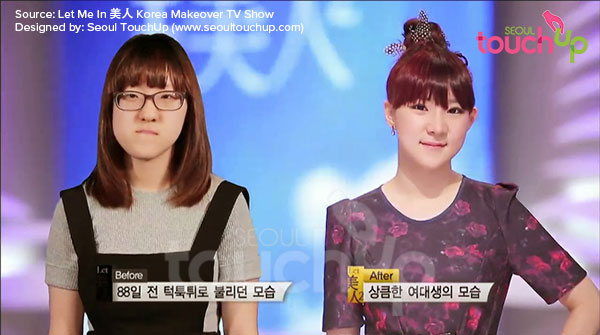 As briefly mentioned before, the very best of Korean plastic surgery are shown through makeover television programs. Customers may be curious as to what these makeover shows are and how they work. To start of with, while there are many makeover shows in Korea, none of them comes close to “Let Me In”, who by far has the highest viewer ratings. The show features before and after transformations of ordinary people as well as those suffering from disfigurements. Maybe the greatest part of it all is that they are given this life-changing plastic surgery service for free.

There have been mixed feelings about the show, with some critics claiming that it dramatizes situations and promotes vanity in people, encouraging them to seek unnecessary surgery. Others see it as a charitable act. One thing is for sure though, “Let Me In” showcases the best work done by the country’s finest surgeons.

But that’s not all. There’s even a television show that does the complete opposite of what “Let Me In” does; the show, "Back to My Face" documents people who would like to undergo surgery, but this time in efforts to regain their old face.

At first glance, it seems quite strange. But, then again, there are plenty of cases where the result of surgery turns out to be worlds apart from how a person had imagined it to be. The picture on the box doesn't do the product any justice, the ads fail to deliver. Unfortunately, it happens often. Hence, it’s important to get even step one right the first time around. Many people try to envision their desired surgery results, without first wondering if it is actually achievable with their present face or current health condition.  One thing that customers may want to be mindful of here, is to ensure that no hiccups happen in the process, one should as many questions as possible.

Plastic Surgery in Korea vs. America

What is it exactly that makes Korea such an ideal destination, though? Compared to say, America? For one thing, advertisements for jaw-shaving surgeries are hard to come by in America. However, these bold adverts can be seen all over Seoul, where the V-line jaw surgery trend had first arose. The typical Asian woman’s body has its differences, such as a petite body and smaller breasts. Getting the proportions right can be a tedious process. Therefore, many Asian people choose to put their body in the hands of an Asian surgeon who is well-experienced in reshaping the Asian body. After all, surgeons in Korea had to go through practice after practice, where only the top 1% who graduate from medical school become qualified surgeons.

Compared to Korea, America's plastic surgery industry and culture has its own uniqueness. The standard of beauty in Hollywood is that of a tanned, slim, sophisticated woman and a muscular, manly man. In Asian countries, however, tanned skin is associated with laborers who had to work under the scorching hot sun. So in Asian culture, fair skin is prized. The Korean standard of beauty certainly views fair skin as beautiful, together with large eyes, a well-defined nose and a small chin. 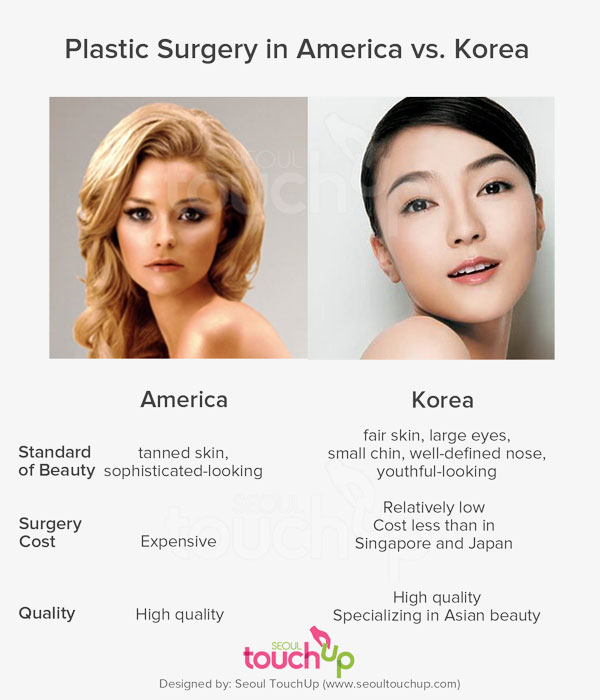 Another common topic that customers usually discuss with Seoul TouchUp is this, “What makes Korea such an ideal destination for plastic surgery, compared to places like America?” The simple answer is that Korean doctors understand the Asian body enough to create natural-looking results. These natural-looking results are the hallmark of Korean plastic surgery. On the other hand, Korea is also regarded as a great destination for Caucasians because of both its lesser cost and for its excellence in complex surgeries such as facial bone contouring and anti-aging procedures.

Another main reason that customers choose Korea over America is due to the standard of beauty. Compared to Korea, America's plastic surgery industry and culture has its own uniqueness. The standard of beauty in Hollywood is that of a tanned, slim, sophisticated woman and a muscular, manly man. In Asian countries, however, tanned skin is associated with laborers who had to work under the scorching hot sun. So in Asian culture, fair skin is often prized. Perhaps not so coincidentally, the Korean standard of beauty views fair skin, large eyes, a defined nose and small chin as desirable.

One of the main concerns that customers have is whether or not Korean plastic surgery is as safe as it is popular. This often makes customers question whether or not it is worth the trouble in traveling all the way to Korea. When it comes down to it, safety is definitely a legitimate concern. Fortunately, though, Korean surgeons have to go through a rigorous assessment and process in order to be board-certified and deemed qualified. Similar to the American Society of Plastic Surgeons, they have to go through the proper education and regulations before they are fit to work on patients. Also, as Korea experienced a surge in medical tourism since the late 2000’s, the government began to impose stricter laws to circumscribe illegal medical tourism agencies.

How to Come to Korea for Plastic Surgery?

In general, customers planning to travel to Korea for plastic surgery may want to keep the following top ten most asked questions in mind:

It is important to have a clear idea of the answers to these questions above. Why so? Because even though Korean plastic surgery has enjoyed widespread success and praise, there has also been a surge in complaints. Choices are now abundant, but with that, complications have also arose. More and more people who are interested in Korean plastic surgery are also worried about the results. This is a very real dilemma. Not to worry, however, as it is possible to circumvent these problems.