The nose is perceived as one of the most prominent features used to determine the attractiveness, or in some cases the unattractiveness, of a person. A tall and high nose can improve the overall impression of a person’s look. Unfortunately, most Asians have a flatter, less defined nose bridge than Caucasians so it’s not surprising that Korean rhinoplasty has become one of the most popular cosmetic procedures in Asia today. The most requested nose surgery procedures are:

As Seoul TouchUp has experienced, nose surgery is perhaps the most sophisticated surgery of all. It has to take account of a lot of factors such as the length of the nose bridge, the width of the nostrils and the shape of your jaw and cheeks. Korean rhinoplasty is mostly developed for increasing the height of nose bridge and lifting the tip, because of their inherited flat nose. If you are an Asian and wish to have a taller nose with more definition, there is no better place in the world than South Korea that can perform your rhinoplasty. It doesn't mean that having a high nose is always attractive. It has to go in harmony with the shape of your eyes and face. Sometimes it could be deviated, hooked or wide. This type of surgery is rather advanced and you should find a rhinoplasty specialist for your specific case.

Best Korean Rhinoplasty Before and After

Rhinoplasty is perhaps the most coveted surgery in South Korea, next to eyelid surgery. (Check plastic surgery trends in Korea) Because of its popularity and doctors' experience in it, you can find many excellent rhinoplasty specialists in Korea. It is good to note that no matter where you choose to have your nose surgery in Korea, the main focus of Korean plastic surgeons will be on making your surgery results as natural as possible. Nose Bridge Augmentation, for example, involves the use of an implant. When the implant is not customized for specific customers and just use the factory-setting implant, the results will be unnatural and unappealing. This is why many times, Seoul TouchUp experiences that customers who had theirs done in Singapore, Thailand or China come to Korea to revise their previous surgery.

Furthermore, "What type, what shape looks good on you" should be your main concern - not "I want my nose like Song Hye Kyo". It is because too high or too sharp a nose doesn't look good on anybody. Spend enough time with your Korean plastic surgeon and find out what shape looks most appealing to you.

1.How long should I stay in Korea for my nose surgery?

In most cases, stitches on your nose will be removed 7 days after your surgery. However, it doesn't mean that your nose will be back to completely normal and natural after 7 days. Seoul TouchUp recommends you stay at least 1-2 more days in Korea, and double-check the result. 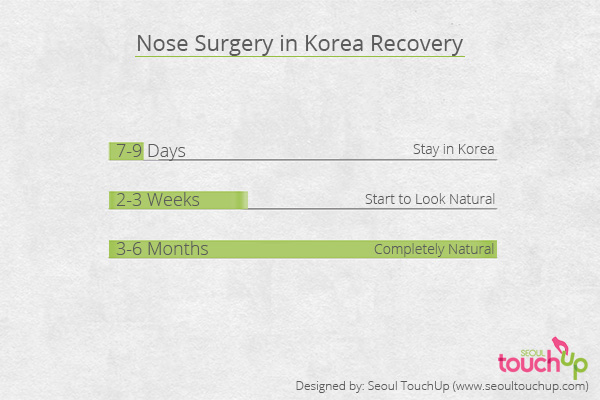 2.How much does Korean Rhinoplasty cost?

USD$4000-$6000 in most augmentation cases. But advanced rhinoplasty and nose reduction surgeries are more expensive and fall between $5000-$7000. As you can imagine, there are some doctors who claim to have invented some special technique and charge higher prices. Although their prices are outstandingly high compared to other clinics, it will be still lower than prices in America and Singapore. (Check the cost of other Korean plastic surgery procedures)

3 When will get natural after having rhinoplasty?

If you are having an augmentation surgery with an implant, it will start to look natural after 2-3 weeks. Normally, it will take at least 3-6 months to look very natural and this is also the point when your nose tip gets more flexible. (Your tip gets very hardened after surgery) Reduction surgery that doesn't involve the use of an implant will typically take less time to get natural. Normally, within 3 months, your nose will look natural as if you haven't done any surgeries.

No. Your implant is semi-permanent. However, there are some obsolete implants in other Asian countries like l-shape implant that needs replacement later on. It is because as time passes, those type of implants will add pressure to nose tip, and eventually damage the cartilage. The safest and most widely used implant is silicone implant in Korea. In most nose augmentation cases, Korean plastic surgeons will use "soft" silicone implant made in South Korea that has been proven to be most natural and safe.

There are so many different nose shapes but by and large, we can categorize them into 5 types. Even if you are unsure of what kind of nose or concern that you have, don't worry. Chances are that nose rhinoplasty specialists in Korea have performed lots of similar cases to yours.

If you heard someone saying, "You look "flat"", it is probably because of your flat nose. Adding more definition to your nose will help leave a stronger impression on others. This is perhaps the simplest surgery in rhinoplasty but most of the time, it will involve the use of an implant.

A bulbous nose can be caused by two parts in your nose : nose bridge bone or nostrils. Since this type of nose tend to create a greedy and angry look, it would be ideal to enhance the nose by making it more proportional to the rest of the face.

Hooked nose has several other names such as beak nose and crooked nose. Some love and some hate this unique type of nose. If you have one, someone might even characterize you by the shape of it. Correcting a hooked nose can be simple or complicated depending on the degree of outward protrusion. What's more important is that you will also have to be ready for the surgery outcome because it might take some time for you to get used to a straight nose.

Like a bulbous nose, a deviated nose is created because of the nose bone or deviated septum. This is perhaps the most difficult surgery in rhinoplasty and due to its uniqueness, instead of a 100% correction, you will have to aim for a 80-90% correction of the deviated nose.

Having a short nose, aka piggy nose or pig-like nose can be generally unappealing. Usually, this type of nose tend to have its nose tip turned upward, showing the nostrils.

Long nose is also another special condition that may make you look older than your age. In some extreme cases, it could almost look like a "witch nose", and some enhancement can help create a more appealing look. 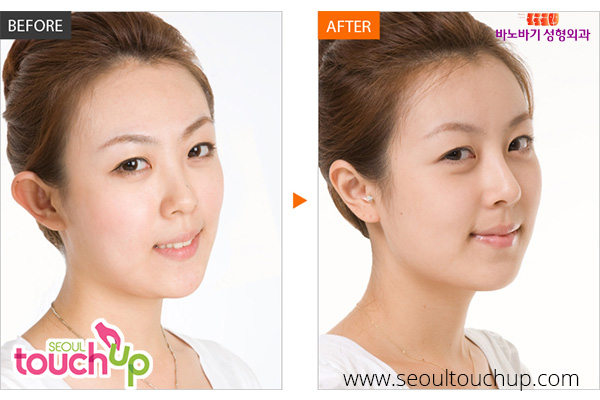 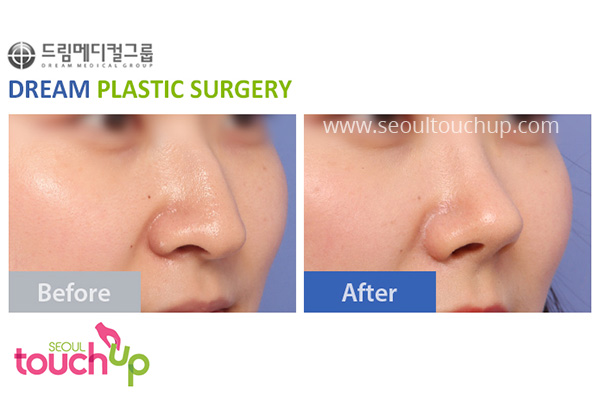