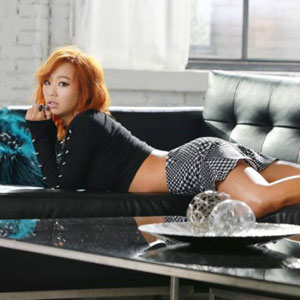 In the last few years, the topic on Korean celebrities and plastic surgery has gotten a lot of attention. Now, it’s no surprise that a big star like Hyorin from SISTAR has admitted to wanting surgery done, yup this happened in Korea -- in a recent episode of the Korean variety show, "Beatles Code".

But, it may come as a surprise to many fans that the South Korean singer and actress has confessed that at some point, she didn't consider herself to have a pretty face.

She said, “My mother has never told me that I was pretty. She instead tells me that my face has a lot of personality, but that it’s not a pretty face.”

The star had previously admitted to have done the popular 20 minute double eyelid surgery done, but that is a relatively simple procedure compared to the highly invasive face contouring surgery – something that she has expressed reluctance in getting.

“But I am too scared. I’m okay with getting IVs and shots,” she said, “but I get really scared when something comes near my face.”

While the East favors a delicate, pure and fair look, the West appreciates exactly how Hyorin looks; her curvy, sensuous figure, beaming smile and expressive eyes – it is unique, to them. It’s rather peculiar, if you asked us, how different parts of the world value so differently – what is one man’s trash is another man’s treasure, so to speak. Maybe Hyorin’s face has too much “character” that is, too different from the Asian beauty standard, but is it not beautiful?

On the other hand, we’ve heard of Asian Americans and standards of attractiveness, how some have felt pressured in conforming to Western beauty ideals, but that’s not the point.

The crux of the biscuit is this: Before getting plastic surgery in Korea, if you ever considered it ... What is treasure and trash to you, reader? What if the society you lived in, valued both double lidded eyes and mono lidded eyes? What if society valued an aquiline nose instead of a straight, well-defined nose? The ball is in your hands, do you see? It’s important not to get too caught up in conventions, after all, wasn’t the belief that started it all, “Beauty is not defined, but created”?

Look at Hyorin, isn’t she well-respected and her work is valued by her fans – even though she doesn’t exactly fit the Asian beauty standard?