It is also a common thing now that the words Korean celebrities and plastic surgery are almost always seen together in the news.

So it’s almost unsurprisingly that according to HelloKpop (who got it from NewsEn), Super Junior’s Kyuhyun had admitted to plastic surgery. All this happened in the Super Junior special of Byul Baragi, hosted on the 18th of September by Kang Ho-dong.

Kyuhyun’s high school photo was shown during the show. 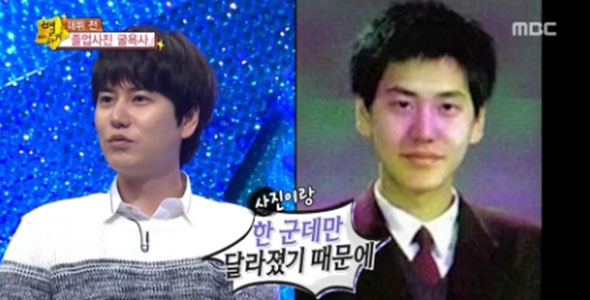 He replied, “What’s the matter? Only one place changed. I didn’t have double eyelids on both eyes.” According to him, his appearance was pretty okay and he was in a school band.

This is no special occurrence, as it is highly suspected that plenty of Korean celebrities have gotten at least one of the following done: their eyes, nose, chin, skin, fat, breasts or even their teeth revamped. When it comes to career opportunities and succeeding in society, South Korea is perhaps one of the only nations that values the individual's image much more than raw talent. Funny enough, a decade or two ago, getting cosmetic surgery done was not commonplace and was often talked about in hushed tones.

Over the years, it is no longer considered a taboo subject, and is embraced by both the youth and old alike.