Depression. Low self esteem. These are just a few conditions that those unlucky from birth may suffer from, these are people who had to bear years of humiliation for something that was never in their control --  their physical appearance. By 'physical appearance', we mean living with deformities that passersby would gawk at -- as though you were a fish out of water.

In the popular make-over show, “Let Me In”, a recent episode featured a Thai women who lived that sort of reality. Except, the twist here is that she undergoes cosmetic surgery and it is said that she now resembles the show’s young hostess, Hwang Shin-hye. The program films complete make overs for women and men, usually those who suffer from physical abnormalities that put a damper on their emotional well-being. There is some word play here: “Me-In”  means “Beauty” in Korean.

On September 4, producers of the show flew to Thailand to film the make-over of two candidates; one of which was Nit Sa Nat, the girl who was to become what they called, a splitting image of Hwang Shin-hye. Before, it was reported that she suffered from low self-esteem and severe depression due to a longer than average lower jaw as well as protruding lips – facial features that gave rise to the cruel nickname of “Witch” or “Transgender”. Through jawline surgery among other less invasive operations, she earned the nickname of “Little Hwang Shin-hye”. 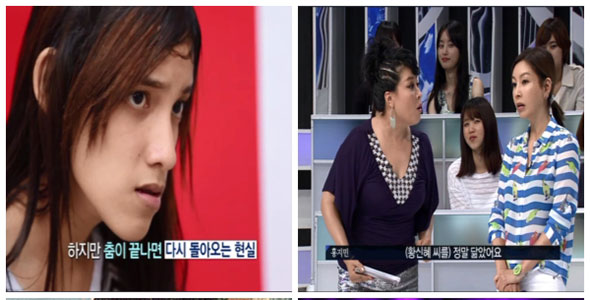 Going into their fourth season, “Let Me In” represents the best results coming from Gangnam plastic surgery, as well as modern day Korean culture and their belief in empowerment through surgery.

Thanks to the Korean Wave, and Seoul’s reputation as a hot spot for all things beauty-related in Asia, flying to Korea for plastic surgery vacations is not uncommon these days. However, if you or a loved one is interested in traveling to Korea for cosmetic surgery, it should be mentioned that Seoul is not the wonderland of plastic surgery; among the hundreds of clinics in Gangnam district alone, there are shoddy and unethical practices.

There are people who claim to be doctors, but who prior to operating on a patient, had only attended a short course. Though, there are board-certified, experienced and reputable practices. Remember though, the very best surgeons are not just surgeons, but are decent human beings too. So on top of that, look for one who is open to listening to your concerns, questions and are there to provide the necessary support during your post-surgery recovery period -- these are the best plastic surgeons in Korea. How do you find them? Before diving into Seoul, it is advisable that you ask around, research, make a consultation, and always, always ask questions !