The work of Plastic Surgery or Photoshop: Miss Korea 2013 Contestants 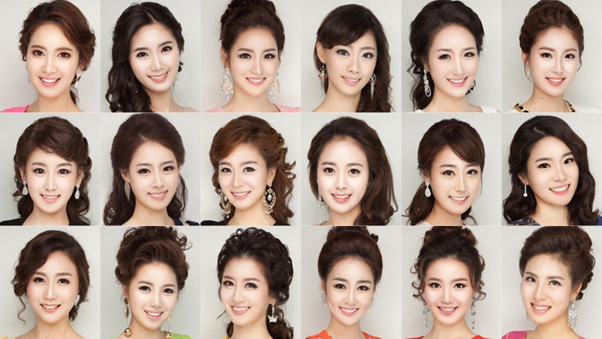 The world wide web is abuzz with a recent controversy surrounding the contestants of the 2013 Miss Korea Beauty Pageant. While it is true that 1 in 5 Korean women have surgically altered their bodies, have the contestants of Miss Korea 2013 done the same, extensively so?  Circulated around various news sources was an image with the contestants, each looking startlingly alike; stylishly perfect hairdos, whitened skin, large eyes, straight and thin noses as well as bright, white smiles. There is a peculiar relationship between gender, globalization and cosmetic surgery in South Korea; It has been said that many Asian men and women opt for plastic surgery in order to look more westernized. This assumption may ring true here for each contestant seems to bear an eerie resemblance not unlike the fictional, Stepford wives.

Many netizens have jumped to the conclusion that these contestants have undergone the knife and so, lost their individuality by conforming to society’s narrow standards of beauty. When the pre-makeup photos of these participants had emerged on ILBE storehouse, a South Korean based social website – the presumptuous conclusion was proven wrong. That said, he photos were just as likely to have been the work of make-up and digital retouching or image manipulation through photoshop.

That said, as onlookers, perhaps we are too quick to jump to conclusions. It is said that even South Korean citizens themselves criticize the people from their own nation whom have done extensive plastic surgery. Older men revile the idea of dating or marrying a “sung-gui” which is slang for “plastic surgery monster” in South Korea. Granted that in their society, South Korean individuals have a fiercely competitive streak – perhaps it is a bit harsh to criticize those who opt to look their best in order to get ahead.

The crux of the biscuit, however, is to not lose one’s individuality and uniqueness, with or without plastic surgery in our everyday decisions. As a user from reddit had said," Most are beautiful without it but telling them that their Korean ethnic features are in fact lovely is as effective as screaming at a brick wall.” Everyone wants to be acknowledged to some degree and if raw talent is not recognized due to a person’s appearance, that is not fair. Is being shunned by society for the way you look, the way to live? Does it come as a surprise then that Korean Plastic Surgery  is deemed as ordinary a ritual to them, as make-up is in larger parts of the Western world?