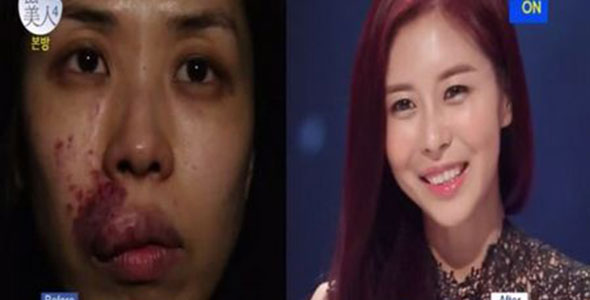 It’s been awhile now, but the July 31st Episode of “Let Me In” showcases the power of cosmetic surgery, when it is done right.

A Korean women, Kim Hee-Eun had suffered from nevus flammeus, a condition that leaves her with small, reddish-purple spots scattered across her right cheek and went on to her gums. It left her horribly disfigured and self-conscious. These facial deformities became an obstacle for her in socializing and in finding a job.

During interviews and in old photos, she was usually seen covering the right side of her face. On top of that, the cosmetic surgeons participating in “Let Me In” did corrective jaw surgery on her, also known as double jaw surgery. After correcting her bimaxilalry protrusion, she was seen smiling, confidently and radiantly at the audience.

While there have been many stunning beauties and gents arising from the show, “Let Me In”, there have also been cases where plastic surgery has went horribly wrong. There are 3 lessons to learn from extreme plastic surgery in Korea that went wrong, something that everyone should be mindful of before undertaking such a major, life-changing decision.

What's perhaps disconcerting is the fact that medical disputes have been on the rise. In 2012, 444 individuals reported to have found their results from surgery to be disappointing. In 2013, this number shot up to 731.

It is possible to achieve beautiful and stunning transformations; only seek out professionals in a reputable clinic, who have the experience and ethics to care for your well-being.