You Can Be Turned Down for Plastic Surgery

Plastic surgeons don’t really have a reputation for turning people down when they wish to undergo a procedure. While most people think that this is entirely due to financial reasons, the truth is that most people wish to have very traditional procedures done that are nothing out of the ordinary, which is why they are generally very easy to get. But there are still quite a few cases where the surgeon may express serious concerns towards your plastic surgery choice, to the point where they turn you down and refuse to do the procedure. If you ever find yourself in such a situation, instead of feeling angry towards to doctor, take a moment to think about their reasoning and why someone in the plastic surgery profession would decide that you are better off not having it done. 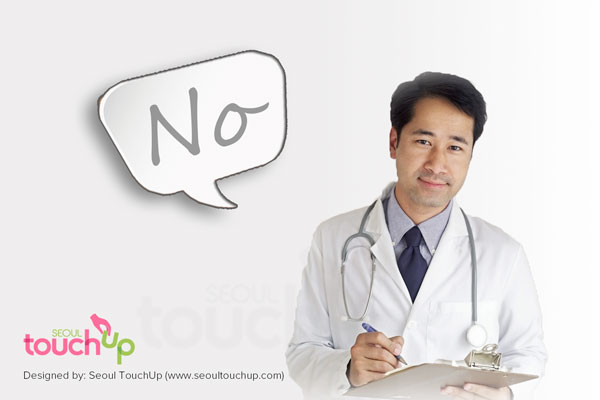 THEY ARE NOT THE RIGHT SURGEON FOR THE JOB

Plastic surgeons tend to have a very narrow point of expertise, simply because it would be almost impossible for them to be proficient for every part of the body and every kind of patient. This is especially true for procedures like facial contouring surgery, which require years of experience in that particular field in order for the doctor to have full command of such a procedure. It should be relatively straight forward to understand why you should immediately accept the opinion of such a doctor. If they feel like they wouldn’t be able to do the best job possible, then why would you ever place any doubt in their decision and risk coming out of it feeling bad? Although it is understandable that you have personally done the research and think that you have found the right person for the job, at the end of the line the most important thing is that the doctor has confidence in their own ability and that they can complete your procedure without stressing about how it will come out.

YOU ARE AIMING FOR PERFECTION

Improving parts of your body because you aren’t happy with them and feel that they could look better is one thing, but developing an unhealthy obsession with wanting to look perfect is another. Perfection is such a subjective point of view that it is impossible for doctors to understand what you mean by it in terms of your own body. Many surgeons can quickly pick up on people who are getting plastic surgery done for this particular reason, and they will deny them as soon as they spot an inkling towards perfection. Again, this is a very valid point for surgeons to make, not only because it will be very stressful both for them and for you, but also because they know that it will likely take many procedures in order to reach a level where you feel perfect, and there really aren’t many people who will put themselves through that journey. Helping you feel better about yourself and improving the health of your body through plastic surgery is one thing, but attempting to reach levels that are, in reality, unattainable is another. You should try to understand the complexities of ‘perfection’ before even thinking about getting plastic surgery done, but if your doctor feels as if you are making unrealistic choices, the best thing to do would be to take their advice and perhaps think of a new look.

This is perhaps even less achievable than perfection. While some surgeons will claim that they are able to do this, a true professional knows that no matter how many procedures you get done, you will never be able to look like someone else. Additionally, certain changes made to your body that look good on someone else may look weird on you and feel uncomfortable. Minor changes that are inspired by someone else’s look are ok, but thinking that they can be entirely copied onto your own body is not a healthy way of thinking about your procedure. This is especially true for procedures like the Korean double jaw surgery, which has a different starting point for each patient because they all have different bone structures to begin with. Additionally, procedures like this one that change the shape of your bone structure may have to be done multiple times in order to even come close to someone else’s shape, and this is certainly not something that is advisable. And in the end, you may still not come out looking the way you imagined in your head.

Yes, beauty is in the eye of the beholder, but some patients really do stress over parts of their body that really don’t need anything done on them. If a surgeon thinks that you are unrealistically looking at your body to the extent that plastic surgery would do more harm than good, then they will be likely to reject you. Although all minor procedures can be done without much previous preparation and to the patient’s wishes, things like breast augmentation require a lot more thought and a pretty serious recovery period. Because surgeons know the details of every kind of procedure, they will refuse to do it on you if they feel that you will be placing yourself and your body under unneeded stress and pain. This is probably the hardest rejection to accept because you go back and forth between questioning your own opinions about your body and those of the doctor. So if you do find yourself in this position at least look for a second opinion before feeling offended.

Some people take rejection very seriously, while others will be quick to accept the doctor’s opinion and move on to something else. If you have already been rejected for a procedure but feel that the surgeon has made the wrong choice, or you are so passionate about it that you simply cannot see why you shouldn’t be able to have it done, then definitely look for a second opinion.

Regardless of how far your next doctor is from your previous one geographically, the best way to always approach a second opinion is to not tell the new doctor that someone has already previously rejected you. This is the best possible way to ensure that they will not be influenced by what someone else has said, and will give you their most honest opinion. Go through the consultation with your new doctor as if it was the first time that you have ever mentioned this procedure to anyone, and then sit back and listen to what they have to say. Whichever way the conversation moves, you will need to be cautious.

If they also decide to reject you, then you really should seriously think about moving on with your decision to have this surgery done as there is obviously something wrong about the way that you have decided to approach it. If on the other hand the doctor agrees to do it right away without raising any more questions, this is also a suspicious road to take. Simply because it does not seem logical that one surgeon will flat out reject you, while another one will proceed with the procedure without a fuss. A safe middle ground would be someone who has concerns about what you wish to accomplish, but is happy to help you provided that you understand exactly what your procedure will entail.

Korean plastic surgery is full of professional surgeons, many of whom specialize in very specific areas. Finding a surgeon in Korea is never a problem, but you should still only look for someone who will consider both you as a human being, and the pros and cons of the procedure that you wish to have done. Do not take rejection as a failure but rather as a warning that perhaps you should distance yourself from the procedure for a while and think about it in a new perspective. Remember that the whole point is for you to feel good about yourself, but also to be handled by a specialist.