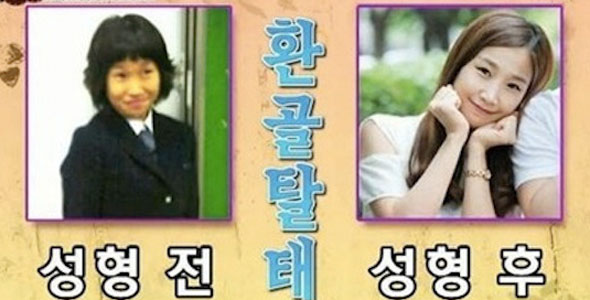 This month, another celebrity has admitted to having gone under the knife. Recently, popular comedian So-young Park was busted on KBS2TV’s variety show, Vitamin; a popular show that focuses on the topic of health-related matters reveals her plastic surgery secret.

In the episode, X-ray and CT scans were taken, and for So-young Park, they found a peculiar object that had appeared in her CT scan. What looked to be a brown pole-shaped object was in fact an implant. Even Ms Park had stared at the object in confusion, then, a specialist remarked, “Plastic surgery can’t trick the CT scan.”

In an interview with Sports Chosun, she had stated, “I got double eyelid surgery in junior high school. My mom let me get it so I could become prettier. I also got my nose done, but that’s only because my nose was crooked during junior high.”
The fact that she had gotten Korean eye surgery and an Asian nose job done, two very popular procedures in Asia – may come as a shock to many a fan as she is often admired for her ”goddess-like looks”.

Then, she had revealed pictures of her elementary school days. Perhaps it may even be an admirable move, as she said, “I don’t think it’s a bad idea to truthfully state something as is. The past is important, but I hope people focus more on the current actress Park Min Young.”

Although Korea is one of the most popular destinations for cosmetic surgery in all of Asia, as well as boasting 1 in 5 South Korean women having had surgery, it is still not common for celebrities to publicize such a thing. For Ms Park, the way her secret was exposed was unexpected for her.

Things could be much worse, however, as “Korean celebrities and plastic surgery” has been a conflicting real-life issue for a long time now; there have been cases where Korean stars lose publicity lawsuit against plastic surgeon.