If you have ever felt insecure about the way you look, and you probably have done so at some point in your life, you are definitely not alone. No matter how much we try to pursue the world that physical beauty should never be a primary factor to distinguish a person’s worth, we are still failing to convince the majority in believing the same thing. You cannot choose the way that you will look when you are born, and as you age, your appearance will change due to both genetic and environmental factors. And yet, even though so many of us have the same feelings of insecurity and a hope that one day we can change and be happy about how we look, we tend to condemn others who have gained the courage to undergo plastic surgery and to pursue the look that they have always been hoping for. Such an unhealthy attitude towards the way that other people live their life is preventing everyone from achieving their goals, and this is especially true in the world of Korean idols. With careers that place them continuously under the spotlight and free scrutiny from everyone around them, it is not wonder that they can often suffer from low self-esteem. ZE:A’s Hwang Kwanghee is only one example of an idol who didn’t feel like he quite fitted in in the idol world, and who decided to be brave about his decision and to change what he didn’t love about himself.

You don’t have to agree with plastic surgery, but what you should admire are the people who have done plastic surgery to make themselves happy, and who are proud of the way that Korean plastic surgery has helped them achieve a better life. ZE:A’s Hwang Kwanghee has recently become the poster child for plastic surgery and he is definitely proud of how much he has achieved through it and how happy he now feels about himself.

The singer has many times been reported in many interviews describing how unhappy he was with the way he once looked, particularly the shape of his nose and other facial features. Regardless of how much effort he tried to put into his physical appearance without any other external factors, he reported that he always felt a lot less attractive than the other ZE:A members and thought that it was finally time to change something about that thought. 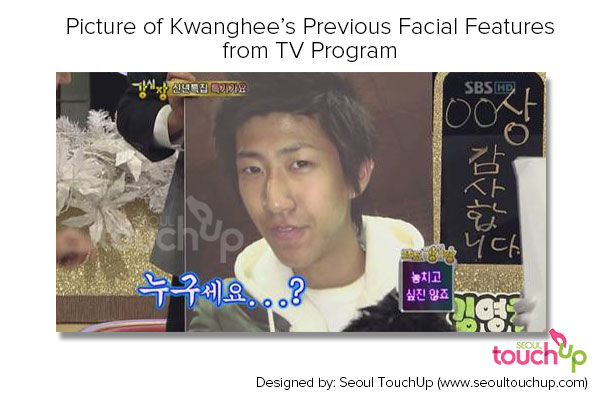 When a picture of his previous facial features was shown during a TV program he looked embarrassed and crumbled up the picture before laughing about it. And if you are thinking, “Well why does he feel so embarrassed about it shouldn’t he just accept the fact that people will ask questions?” then you already know the answer to that question, and so does Kwanghee. Society will ask questions about people’s physical appearance either way, so what he decided to do was embrace his feelings and stand strong behind this area of medicine which has greatly helped him to now live a very happy life. He has fought the critics who have accused him of not being brave enough to face life with the features that he was born with, and he has also been grateful to the many fans who have shown their continuous support.

A SINGLE NOSE PROCEDURE MADE A HUGE DIFFERENCE

Contrary to popular belief, it actually doesn’t take much to completely change someone’s physical appearance. Kwanghee underwent a nose correction procedure in Korea which completely changed the appearance of his face. What he achieved with this one surgery is a smaller, more defined face, which also accentuates his eyes, and a much softer and more boyish look. Any additional, smaller procedures that he may have had were only touch ups after this real change. This just goes to show how much you can achieve if you plan your surgery carefully and if you are aware of the one feature on your body that will have the biggest impact on your entire look. This may not always be the nose, different people have different features that make them more or less attractive, but choosing the one thing that will give you the best outcome will be enough. Besides, it’s not perfection that you should be aiming for when you undergo plastic surgery, but simply a new look for on feature of who you are. There is nothing wrong with imperfections, they make you stand out from the crowd, but you shouldn’t be forced to believe that you have to stick with them for eternity if you feel very uncomfortable in your own skin.

KWANGHEE HOPES TO INSPIRE OTHERS WITH THEIR PLASTIC SURGERY 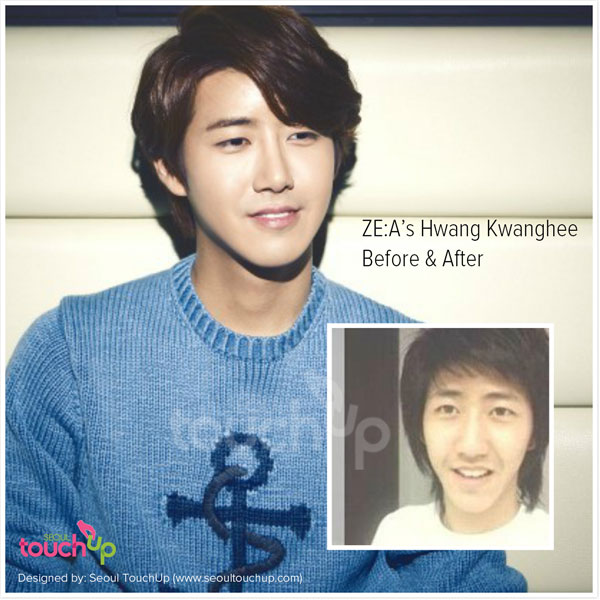 By encouraging an open conversation about plastic surgery we can help many people around the world live a better, and in many ways, a healthier life. If you are someone who is thinking of having a plastic surgery procedure done in Korea, then you can rest assured that you will be met with more support than criticism here purely because so many Koreans have undergone and are open to plastic surgery. If you must start your journey somewhere, then perhaps a place closer to home is the right beginning.

Kwanghee’s father has openly stated that he is immensely proud of his son and that he fully supports his plastic surgery decisions. How the rest of the world reacted to the idol’s facial cosmetic surgery is one thing, but how his family reacted is certainly much more important. As a person whose family openly shows their support for him, Kwanghee is a wonderful example of how to deal with criticism from the outside world, and it is now not surprising at all that he has become a spokesperson for the clinic that changed his life for the better. He noticeably smiles a lot more now and seems to be enjoying himself as an equal member of ZE:A, something which he personally didn’t think that he was before. Inner peace and love is what ultimately brings out the best in people, and it also accentuates their personality, and usually so for the better.

If you also happen to be someone who has a very supportive family, then the plastic surgery journey will not be emotionally straining, and you will be able to share your joy with those who are closest to you. If your family and friends aren’t as supportive, perhaps they will change their mind a lot more easily once they see the positive effect that your desired procedure has had on your life. We all seek for different things to make us happy, and it should also be noted that the opinions of those who do not matter in your life should not be taken into account.

HOW YOU CAN START YOUR PLASTIC SURGERY JOURNEY

Start it with care, understanding, deliberation, and a very good amount of previous research. Do not think of it as an operation but as a start of a new chapter in your life and the accomplishment of something that you have perhaps wanted for a very long time. You do need to take your health into consideration of course, but above all, only choose the procedures that will make you, and only you, happy with who you are and never fall under anyone else’s influence, because you are doing this for yourself, and not for anyone else. If it would make you feel more at ease, you can openly talk to people who have already undergone plastic surgery to get a better insight into how it has affected and changed their life, and then perhaps it will be a lot easier for you to make your final decision.